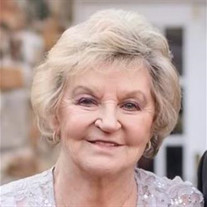 Bobbie Marie Johnson (Spradlin), was born on July 27, 1945 in Mare Creek, Kentucky. She passed away on January 24, 2022 at Lakewood Ranch Medical Center in Sarasota, Florida. Married November 7th, 1963 to Virgil Lee Johnson. They were very happily married for 45 years until his death in 2008. She was a stay-at-home mom until 1980, then she took a job working for 7-11 as a corporate manager. Along with her family, in August of 1988, she opened her first 7-11 franchise at Masonic and Harper Avenue in St. Clair Shores, Michigan. Her second franchise located at Hall Road and Gratiot Avenue was opened by her daughter Donna in August of 1997. She was very proud of the family businesses she built with her husband, daughter, and son, and this legacy will live on through her children. Bobbie was an avid bowler who loved to shop, visit casinos, and spend time with her children, grandchildren and especially her beloved sister Ruby Martin. Virgil and Bobbie loved to spend time with Ruby and Howard in Ocean City, Maryland, and together they traveled to numerous 7-11 conventions, all across the United States. Bobbie being not afraid of adventure, in 2012 became a snow bird spending winters in Hollywood and Ellenton, Florida. She enjoyed the ocean, beaches, and casino’s, meeting new people, and spending time with her good friend Wanda. Loving mother of Donna (Nick) Viviano and Virgil (Shelly) Johnson. Dear grandmother of Austin, Lance (Danielle), Alaina Johnson, Julianna Viviano and Nico Viviano. Dear sister of Ruby (Howard) Martin, Robert (Sandy) Spradlin, the late Lee (Bob) Elliot, the late Jim (Beatrice) Spradlin, the late Mary (Walter) Wagner, the May (Dean) Guisinger and the late Tom Spradlin. Visitation 3:00 – 8:00 p.m. on Monday, January 31, 2022 at the Gendernalik Funeral Home, 35259-23 Mile Road, New Baltimore. Funeral Service on Tuesday, February 1, 2022 at 11:00 a.m. at Gendernalik Funeral home. .

The family of Bobbie Marie Johnson created this Life Tributes page to make it easy to share your memories.

Send flowers to the Johnson family.