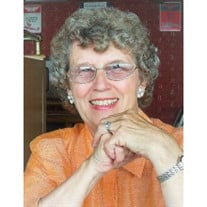 Beverly Wright Rice was born April 14, 1934 in Pontiac, MI & passed away Jan. 2, 2021. Loving wife for 64 years of Charles W. Rice, beloved mother of Charles David (Carole Woods), Elizabeth (Janet Neubecker) & Amy Rice-O'Rourke (David O'Rourke) & amazing Grandmother to Jesse & Isaac. Beloved sister to Gary (Kitty) Wright. Beverly married Charles in 1956. They lived in Albany, NY, Elyria, OH & settled in New Baltimore, MI where they lived since 1966. Beverly graduated from Pontiac High in 1954 & from Michigan State University in 1958 with a degree in education. She continued her studies at Garrett-Evangelical Theological Seminary in Evanston, IL, where she earned her Master's in Theology. She became ordained as Diaconal Minister in the United Methodist Church (UMC) in 1984. She was active in the UMC, serving for years as the Sunday School Superintendent & teacher at the 1st UMC in Mount Clemens MI also teaching after retirement at Grace UMC. Beverly enjoyed many volunteer opportunities including Cub Scout Den Mother, Girl Scout Leader and Vacation Bible School Teacher which involved one of her true passions; teaching children about the love of Jesus. Beverly harnessed her determined energy and favorite word 'enthusiasm' while working for the Detroit Methodist Conference; traveling through Eastern Michigan & the Upper Peninsula in her "Skills on Wheels" van, which would accrue over 100,000 miles. Her position to be an independent woman persisted as she challenged roles both in and out of church. Beverly professionally trained teachers in a manner that provided unique learning opportunities to educators of small & large churches. She transported hundreds of books, provided resources & modeled innovative practices such as 'Godly Play'. She was an advocate for children's intelligence & championed the belief that children learn best through play; even in Sunday School. As such, she encouraged utilizing models, play sets & playscapes to retell Bible stories and incorporated new practices to imbue the importance of church traditions and sanctity of rituals to even the youngest of God's children. Once Beverly retired in 1997 she moved into another role she cherished; Grandmother. This allowed important time with her grandsons, being an essential part of their early years through regular childcare & also yearly individual trips to Universal Studios, FL, the Field of Dreams, to see airshows in WI & NY & steamship rides on the Mississippi as well as many other adventures. Here again, she embraced looking at the world through their eyes & relished time spent with them, reading stories & taking many trips to the mall, park, libraries & museums. Sadly, she was diagnosed with Alzheimer's in 2010, a difficult diagnosis for anyone but extremely difficult for someone who thrived on learning, reading, and traveling as much as Beverly. Her husband, Charles, who has been waiting for her to join him by God's side, helped her hold on to her love of traveling by taking her to the Holy Land, Europe, exploring the States in their RV and coordinated family Caribbean Cruises which brought smiles to her face. She is also known as Aunt Beverly to many nieces & nephews who recall how she would bring an 'extra' small gift for the other kids when it wasn't their birthday, just so they did not feel left out. Throughout Beverly's life, her remarkable faith was unwavering. She leaves a legacy that embodies the importance of the volunteering, the significance of teaching, the importance of valuing a child's perspective, & also the importance of engaging in life with enthusiasm & the value of living each day to its fullest with hope, love, strength & sometimes a little bit of sass.

The family of Beverly Wright Rice created this Life Tributes page to make it easy to share your memories.

Send flowers to the Rice family.