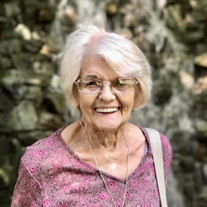 Beverly Ann Lundberg, age 87, of Foley, Alabama passed away on Monday – March 7, 2022. Beverly was born on September 30, 1934, in Detroit, Michigan, to Prosper and Stella (Kero) Veryser. Her family later moved to Mt. Clemens (now Chesterfield) where she spent her youth on her great-grandparents farm on Cotton Road, and later moved to their own home on Jefferson Avenue. She was a 1953 graduate of St. Mary’s High School in Mt. Clemens and was a faithful and devout worshipper in the Catholic church throughout her life. Beverly was the mother of her “Fab Four,” Michael Ray, Linda Ann, Robin Denise and Jill Therese. On September 12, 1980 she married her long time fiance’, David Lundberg. Beverly was an avid fan of anything related to her grandchildren, the University of Michigan football team, the color purple, sweets (especially malted milk balls from Sears) buying shoes, traveling, and Starbucks. She is survived by her children: Mike Lanham (of Jacksonville, Florida), Linda (Bill) Hamacher (of Kalamazoo, Michigan), Robin (Jesse) Taylor (of Foley, Alabama), her grandchildren Christopher (George Ranous) Lanham, Elizabeth Wirick, Jacquie (Tyler) Wimpy, Will (Claudia) Lanham and great grandchildren: Grace Lanham, Penny Wimpy, Eleanor Wimpy, Liam Lanham, and her cat, Smokey. She is also survived by several nieces and nephews and many dear friends in Arizona, Michigan and Texas. She was predeceased by her daughter Jill (Rick) Wirick, husband, Dave, her brother Eldon (Bing) Veryser and sister-in-law Janet (Miller) Veryser. There will be a visitation in her honor from 3:00 -7:00 p.m. on Friday, March 25, 2022 at the Wasik Funeral Home – Gendernalik Chapel, located at 35259 23 Mile Road, New Baltimore, Michigan. There will be a funeral mass at 10am on Saturday – March 26, 2022 at Saint Mary's Catholic Church 36254 Main Street, New Baltimore, Michigan 48047. Following the mass she will be inurned at Resurrection Cemetery, 18201 Clinton River Road, Clinton Township, Michigan 48038, Mausoleum of the Angels Level B #92 where she will be reunited with Dave.

The family of Beverly Ann Lundberg created this Life Tributes page to make it easy to share your memories.

Beverly Ann Lundberg, age 87, of Foley, Alabama passed away on...

Send flowers to the Lundberg family.