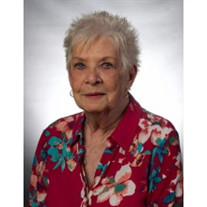 Barbara Jean Richards Born in Detroit on Tuesday, July 23, 1935 Died on Tuesday, May 25, 2021 Barbara is survived by her children, John "Jack" (Gwen) Richards, Lisa Richards, Larry Richards, and Jim (Diane) Richards and her cherished partner Keith Wood. She was a loving grandmother to Marla Greenwell, Brian Greenwell, Amanda Simpson, Aaron Richards, and John Richards. Continuing her legacy are her cherished great-grandchildren Gideon Casey Greenwell, Nolan Simpson, and Audrey Jean Simpson. She was predeceased in 1992 by her husband John Richards. Barbara was raised in Detroit and later nurtured a loving family of four children with her husband John. Throughout her life, Barbara's kitchen table and porch was always open for laughs, tears and good counsel. Always with a dish towel on her shoulder, the natural life of the party gave endless celebrations, firing up her crockpot and mixing together a batch of her delicious macaroni salad. Her home in Detroit and later in New Baltimore were both filled with warmth and love. She always had stories to share of how proud she was of her children, grandchildren and later her great-grandchildren. Barbara had a knack for passing out the compliment that you just needed to hear that day and was an olympic level shopper who never failed to find the perfect present. To have been loved by Barbara was truly the ultimate gift one could ever receive. After her husband's retirement, Barbara moved to New Baltimore in 1988. Quickly she established herself as the unofficial Goodwill Ambassador of New Baltimore by visiting local shops and introducing herself. While Barbara not a rich woman, she was rich with generosity. Barbara lived life to the fullest, was generous to a fault, funny, self-deprecating, devout in her faith and life. Her true fortune was her intelligence, her tender-heartedness, her fascination with people, and her capability of truly listening to everyone she met. Everyone was her best friend and they in turn learned to create the same kind of friendships. She was the original definition of networking. Named a Citizen of the Year for New Baltimore, she was also honored as Macomb County Volunteer of the Year. She served with local organizations including New Baltimore Lions Club, Civic Club, Historical Society, Goodfellows, BayRama (on parade day golf cart) and with the BayRama Queens, Art on the Bay, Music by the Bay, Kiwanis Club, New Baltimore Farmers Market, Make a Difference Day, Friends of the MacDonald Library. Citizens Advisory Group and more. She supported more than just through donations and attendance, she often bought tickets for others and famously bidding on items she had donated. Barbara was a friend of the New Baltimore Police Department and Fire Department. If there was a fundraiser, she provided gift baskets and monetary donations. Out of her own kitchen her private "meals on wheels" were given to hundreds in need of care. Families suffering loss, illness, or down on their luck were well fed by Barbara and her chauffeurs. There was also an anonymous Barbara. Few would know that they experienced her largesse when she called City hall and arranged to pay for a gravestone or support a family in need. After the death of her husband John, Barbara went to work for Gendernalik Funeral Home as the greeter that would supply tissues and comfort. She funded funeral breakfasts and luncheons, bridal gowns, flowers, toys, clothing. Barbara attended dozens of fashion shows, not just because she loved the fashions and high heels, but because she could contribute to good causes. She loved Wigs4Kids. She supported political candidates, often attending opposing candidate fundraisers. Barbara served on the Anchor Bay Community Foundation from 1996 until her passing. In 2019 the Foundation honored her service with a fundraising event in her name. The Barbara Richards Magic Wand Fund for children was dedicated. Barbara granted wishes with purchases of toys, clothes, and made magic for a dozen children thus far. In her last days she dictated plans for a fundraising event where hundreds of her dolls would be auctioned off to ensure that the Magic Wand Fund for Children would continue to support children in need. When Barbara was first told that she had a life-threatening illness, she made special arrangements with an old friend, the Blessed Father Solanus Casey (1870-1957), and told him that her work here was not finished. She needed special dispensation for the birth of a great granddaughter and one more family Christmas. In the meantime, she continued to work tirelessly to comfort those who had suffered loss, and those who needed to be in the embrace of their best friend. But she promised that when he needed her she would come. And so she departed having given the lesson to all of us that while hearts may be broken, Barbara had a life well-lived and taught others to always be an agent for good and for joy. This is her legacy. As you reflect on this loyal and caring woman, consider doing an act of kindness and keep her in your heart. A private service has been arranged. Donations will be welcome to the Anchor Bay Community Foundation (ABCF) at P.O. Box 88, New Baltimore MI 48047 and will be directed to the Barbara Richards Magic Wand for Children. For more information https://abcf.us/give/established/barbara-richards-magic-wand-fund-for-children/

The family of Barbara Richards created this Life Tributes page to make it easy to share your memories.

Send flowers to the Richards family.